Rabble-Rouser in the House 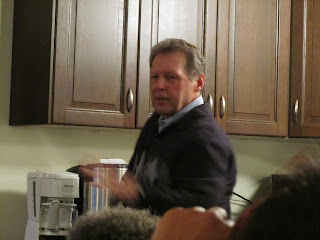 This last Wednesday night, our training group hosted Fr. Roy Bourgeois, a Maryknoll priest and a controversial figure in the Catholic Church. First and foremost, he’s a really nice guy and he’s very earnest about what he believes. The controversy stems from WHAT he believes, some of which flies in the face of the Catholic church’s structure.

He’s known for his stance on two major issues. Most recently- and most controversially- he has been outspoken in favor of the ordination of women priests in the Catholic Church. It is an understatement to say that the Vatican is not cool with this. Because of Fr. Roy’s stance and his participation in the ordination of a woman (he delivered the homily at the service) he has been excommunicated. He is very clear that his conscience will not allow him to recant, as he feels that it is sexist to state that a man’s call to the priesthood is authentic, but a woman’s is not. He has appealed to the Vatican to at least allow this topic to be discussed and debated in an open dialogue. His is a very controversial stance, and I know there were people in the audience that were not in agreement, and that is OK. In no way are we asked to agree with this if we are opposed. MKLM is a big enough family for multiple viewpoints.

Here's my quick opinion: I've not really given much thought to the issue, honestly. Personally, while the idea of women priests seems strange to me, I find no moral reasoning to be against it. The Vatican has a clear stance on the issue (Ordinatio Sacerdotalis), so I expect Fr. Roy will ultimately get booted or they'll just tolerate him and never actually finalize any of the threats; I certainly don't expect a reversal of the Vatican's opinion. And I also expect that the idea of women priests is a predominately Western viewpoint; I cannot imagine there's much support for it in Africa or Latin America, and what Fr. Roy is asking would affect every Catholic, so worldwide support would be a must. I expect we'll have married priests before we'll ever see a woman priest officially recognized by the Vatican. But I commend the man for staying true to his conscience, even in the face of a great loss of what he holds dear. CLICK HERE to read the statement Fr. Roy sent to Maryknolls when asked to recant his support. (It should also be pointed out that Katie and I have had some pleasant chats with Fr. Dougherty, to whom the letter is addressed and whom Fr. Roy still calls a close friend.)

The second issue- and his primary claim to fame- is the School of the Americas at Ft. Benning, GA, which has been renamed the Western Hemisphere Institute for Security Cooperation. The school serves as a training academy for military personal from Central and South America. The crux of the matter is as follows, according to the site www.allgov.com:

"WHINSEC is a Defense Department facility at Fort Benning, near Columbus, GA, which provides “professional education and training for civilian, military and law enforcement students from nations throughout the Western Hemisphere.”

...It is the Defense Department’s principal Spanish-language training facility and, along with the U.S. Air Force's Inter-American Air Forces Academy (IAAFA), attracts the largest number of Latin American military students.

There have been more than a few people trained at the facility who have been implicated in human rights abuses and murders. In protest of this training facility, Fr. Bourgeois founded School of the Americas Watch. Every year in November, this group is joined by thousands of others to protest outside the gates of Ft. Benning.

Now, here’s where the evening gets surreal and very amusing to me. Years ago, I bought a punk music compilation which contained the song “School of Assassins” (about the School of the Americas) by the band Anti-Flag. In the middle, there’s a sample of a guy yelling in protest of the SOA, and lo and behold, it’s Fr. Roy. So here I am Wednesday night, sitting across the table from the man himself, and I tell him I have a song in which he’s sampled. He’s never heard it, so I go get my computer, and minutes later find myself playing the song to the very man sampled within.

He was so freaking excited about this song. When we were wrapping up dinner, I took 2 pictures with him. The first is the more formal shot: 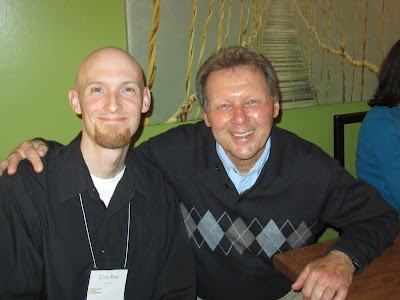 Then, he asked Katie to take one more shot and he threw his fists in the air and yelled “Anti-Flag! Get Those Motherf@#@$!” AWESOME. 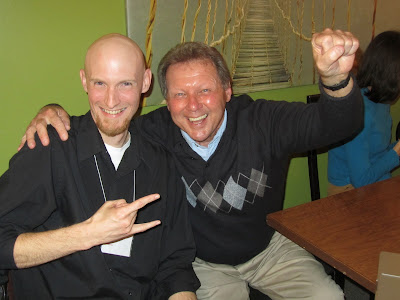 Here’s a YouTube video of the Anti-Flag song that contains images of the yearly protests. Click HERE to see the lyrics of the song.

Feel free to post comments and thoughts in the comments section. There’s a lot to talk about in here.
Posted by Baldman76 at 5:39 PM

That is just too cool. I love it when things like that happen!