So I was talking to one of our soon-to-be-arriving new missioners earlier this week, and she had some questions about the rainy season. After talking with her, I thought I would describe the rainy season to you, my dear readers.

It does not rain all day during the rainy season, nor is it gray and overcast, like I imagine Seattle to be for long stretches of time. We have very few days that are actually like that. In reality, during the rainy season, it is NOT raining for about 98% of the day. But when it DOES rain, it rains an incredible amount of water in a relatively short time. It is shocking sometimes how much rain comes down in these violent storms that appear out of nowhere and then blow over just as fast. And then it is super hot and sunny and humid again for until the next rain (which is not unlike a lot of summer storms in the southeast USA). It can actually cool down the temperature a bit when the rain comes at night, as it often does, but those storms are just as quick.

So here's a nice simple illustration of the rainy season. 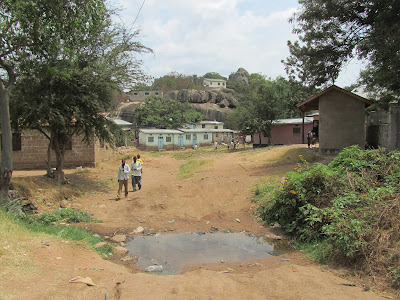 RAINY SEASON (AFTER A 45 MINUTE RAIN): 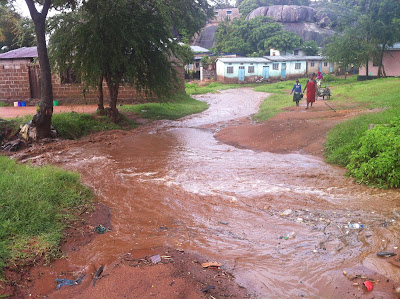 Do note that Mwanza is very hilly, so the amount of water flowing downhill and gathering together causes some pretty gnarly flooding post-storm. About 45 minutes after this was taken, the stream was passable again for those on foot. It's pretty crazy. All this water collects and often floods roads as it flows into Lake Victoria. It can be so much and so strong that cars could be washed off the road. Luckily that hasn't happened in our neighborhood since we've been here.

Katie previously wrote about the water flooding due to garbage clogging the drainage passages, but that was nothing compared to the sheer amount that flowed past today.