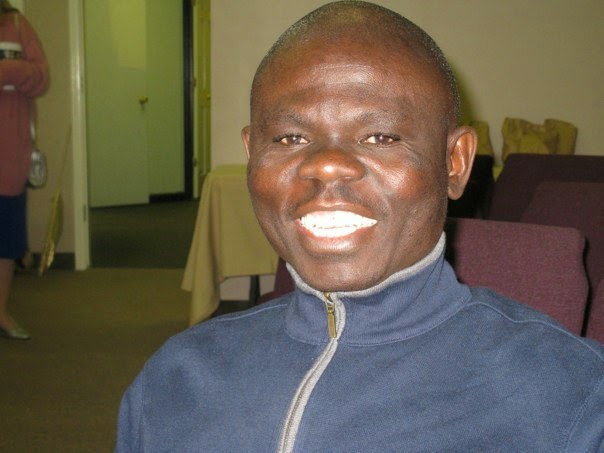 Yesterday, I received word that a friend of mine, Chris Aluah, has passed away this week. Chris had been fighting an illness for a while now, and sadly his condition deteriorated quickly and he passed away. I had not spoken to him very much for the last few years, but I had hoped to be able to visit him when we returned to the States. I'm very grateful I exchanged emails with him just a few weeks ago to send him some moral support.

I want to pay tribute to this man.

Chris was from Ghana (he can be seen in the picture below demonstrating a traditional Ghanaian dance at a meeting of the International Students Association back in 2010). He has been studying for several years at the University of South Carolina, which is where I met him while I was serving as an International Student Advisor. Chris earned dual masters degrees in Social Work and Public Health and most recently was working toward his PhD in Public Health. (Here's a Student Spotlight about Chris from a few years ago.) 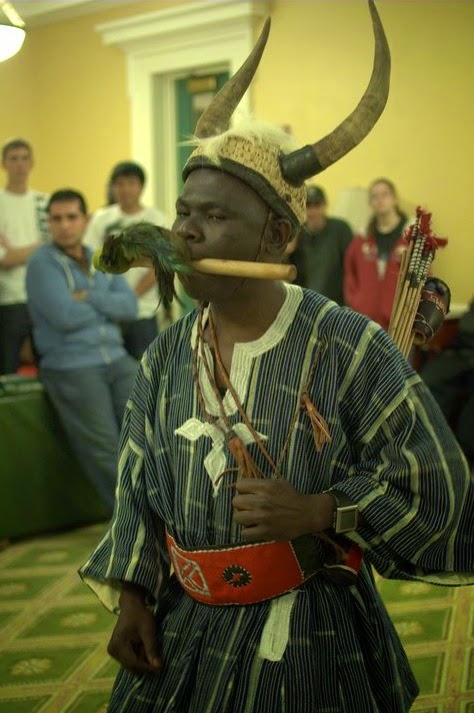 Chris sacrificed a lot to be here. As many foreign students do, he left behind a family to come and earn his degrees. He has a wife and three kids back in Ghana; for various reasons, he couldn’t bring them over to join him in the States. To be so far away from family and so far away from home is a difficult thing, but Chris committed himself to his education to provide a better life not only for his family but also for those around him. He studied Social Work and Public Health; clearly this was a man who wanted to make a better world.

Chris was a fixture of my time at USC, but I am most indebted to him for his assistance in getting a simple idea off the ground, an idea that has grown into one of the most vibrant student organization on campus. Back in 2009, there was a clear need for supporting African students studying at USC. I had an idea to start an African student organization on campus; ideally, it would be a group where students from across the African continent could meet, socialize, and support one another. However, I wanted an authentic African voice to bring this organization to life, the voice of someone who would be speaking not just to African students, but as an African student; I immediately thought of Chris. We shared a Social Work background, and he had already demonstrated a commitment to working to improve circumstances for other African students through various avenues on campus.

I outlined my idea for an organization to Chris and explained that I could logistically pull it together, but I felt the call to create a Pan-African student group really needed to come from an African student. I asked if he would be willing to be the voice of the invitation, and he readily agreed. We decided that he would draft up a letter of invitation to invite any African students to join us for a meeting to hammer out the details and formally draft a constitution for this new group. He would write this letter, and I would send it to all the African students on campus through the channels at my disposal as a International Student Advisor.

Within mere hours, Chris had emailed me a draft of his letter of invitation, and let me tell you, it was beautiful. I wish I had a copy of the eloquent text to share with you here, but I’m afraid it’s lost to time. But it was heartfelt, engaging, and a beautiful call for unity and cooperation. It was the spirit of Africa at its finest. The core idea may have been mine, but the soul of the group, that came from Chris.

A small group of dedicated students from across Africa responded and subsequently gathered for several nights of back-and-forth discussions, brainstorming, and debates. In the end, the group hashed out a constitution, I was selected as the organization’s Advisor, and Chris was elected the group’s first President. The Pan-African Student Association (PANASA) was born. 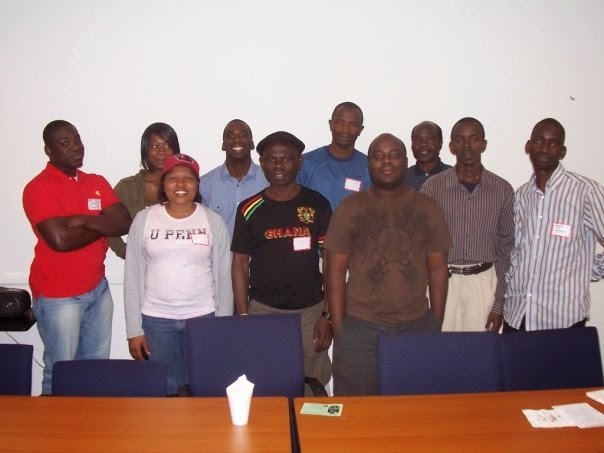 The founding members of the Pan-African Student Association.
Chris is standing in the center wearing his ubiquitous Ghana shirt.

PANASA is now in its 6th year and is going strong, a vibrant and active campus organization helping to support students from Africa and spread the word with the larger USC community about the beauty and talent that Africa has to offer. In the end, this group rallied to help fund raise and garner support to help cover Chris’s medical expenses; the group Chris helped found in order to support African students ended up supporting him in his time of need. There’s a tragic beauty to that.

With the news of Chris’s death, it’s easy to shake my head and think “What a waste. All that hard-work, all that time and effort, for nothing.” He never finished the PhD and was never able to go back home to Ghana to use his education to better his beloved Ghana. But his death is NOT a waste; it’s a loss. The world is a poorer place without him. Chris was a role model to many and a friend to everyone. And his influence stretched far and wide, directly and indirectly: For every African student that felt they had a home away from home in PANASA, Chris has touched their life. Every student that learned a little more about Africa by attending one of PANASA’s Africa Nights, they ultimately have Chris to thank for that. And for all of us that knew the man, who laughed with him, who learned from him, we are all better people because of what Chris Aluah brought into our lives.

His untimely death is a damn shame, but his life was certainly a life well-lived. 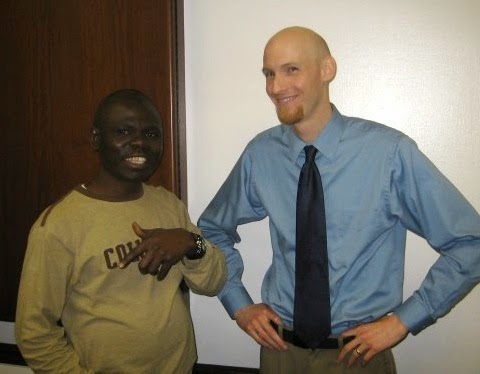 No... Not Chris. I met him back at USC, A God´s man and friend of everyone! Africa lost a son that could bring a lot to this part of the world. R.I.P my friend!

I knew Chris was losing his fight with an illness that ultimately robbed him of completing his doctorate--an ambitious goal for anyone, but extremely so for most students from Ghana. This loss is made more tragic by his close proximity to that goal and the desperate need for leadership in healthcare across Africa. I grieve for his wife and children and hope his legacy will comfort them. Certainly, it will inspire those who know his story of faith, service, and sacrifice. My life was enriched by only a few conversations and meetings that graced me with a glimpse of his potential. Though frail when he accepted his Provost Fellowship at World Night, he left a lasting impression of hope, not despair. I join the Carolina Community who mourn this loss and pay tribute to his faith, stewardship, and courage.

This is a beautiful post. We will make sure that his sister Helen brings it back home with her to his family.
Caroline, Chris' classmate in HPEB

We miss Chris dearly; neither USC nor Columbia nor the world will ever be the same without Chris. He inspired all to work to their fullest potential, even in times of great pain and distress. He never ever gave up and his determination to fight and live was with him every day. I was so honored to be his doctoral advisor for a number of years until I left USC; honored to have sat with him to think through ideas, to engage in the back and forth needed to produce a great proposal (and he had many- he won several prestigious awards and did a premier job defending his innovative dissertation proposal). His work was stellar and creative. Chris never shied away from difficult or controversial topics. He always wanted to dig deeper. His original data collection- interviews with service providers who work with people living with HIV/AIDs in South Carolina- was a first in the field and the interviews should be archived as part SC history. He wanted to uncover and expose the stigma that service providers experienced to then eradicate it.
I will miss those conversations. But we are determined to ensure that his work is known, published and shared with the world. That we owe him for all that he shared with us. Chris, we miss you deeply.

Sad to learn of Chris' passing. I was honored to have known him. He was a very passionate, down to earth man and I enjoyed chatting with him. My prayers and condolences go out to his family whom he loved and missed so much.

I am very saddened by Chris' passing. I was a friend and a brother to Chris. We worked side by side at the Navrongo Health Research Center and continued to collaborate in the US. Chris was that restless brain that sort to always make a difference, his energy was so infectious, his patience without bounds and his maturity was beyond his youth. I stayed in touch throughout his illness and talked to him as recently as a day or two before he passed. Even in pain he exuded hope, tenacity and love. When I did not get a reply to my test Thursday night, I feared the worst, I will forever regret for not making the trip down to be with him even if for a few hours, but I glad I shared with him up until his passing.

Navrongo has indeed lost one of its finest!!

Rest in Perfect Peace, my brother till we meet again.

It is very sad to know that Chris passed away. He was one of the first African students I met during my 3 months internship at the USC. He was down-to-earth, hardworking and deep in his thoughts. He would do anything lawfully possible to achieve his goals. Even years after I left USC, Chris was always prompt to respond to my calls for any kind of information. Rest on, brother. Africa has truly lost one of its best again!

Awwww Chris.My student way back in the 90's at the Teacher Training College. I followed his progress through the University of Ghana till USC.Huge loss. Akwo buu mpem lanyirane naa.. Dr. David Ako Odoi, University of Ghana, Legon

I am very sorry to learn of your friend's passing. He sounds like a wonderful man who will be missed.

It is hard for me to control my tears. Chris was my colleague at the University of Ghana, we were reading same courses and had the strongest study group. He was just so good that everybody wanted to join our team. He had followed with keen interest the progress of each member of the team after our graduation. The last time I spoke to him was somewhere in October to tell him I have started my PhD at the University of Vienna. Its so sad to hear this news. Chris told me his vision was to earn his degree go back home and help the less privileged and vulnerable. I feel sad this could not come to light. God knows best, may his soul rest in peace. I will miss him dearly.
Hasiyatu Abubakari

Garima Pandey said...
This comment has been removed by the author.
2:39 AM