One Safari, Two Idiots, and a Lot of Baboons

The Setting: The Karatu Gate into the Ngorongoro Conservation Area, Tanzania 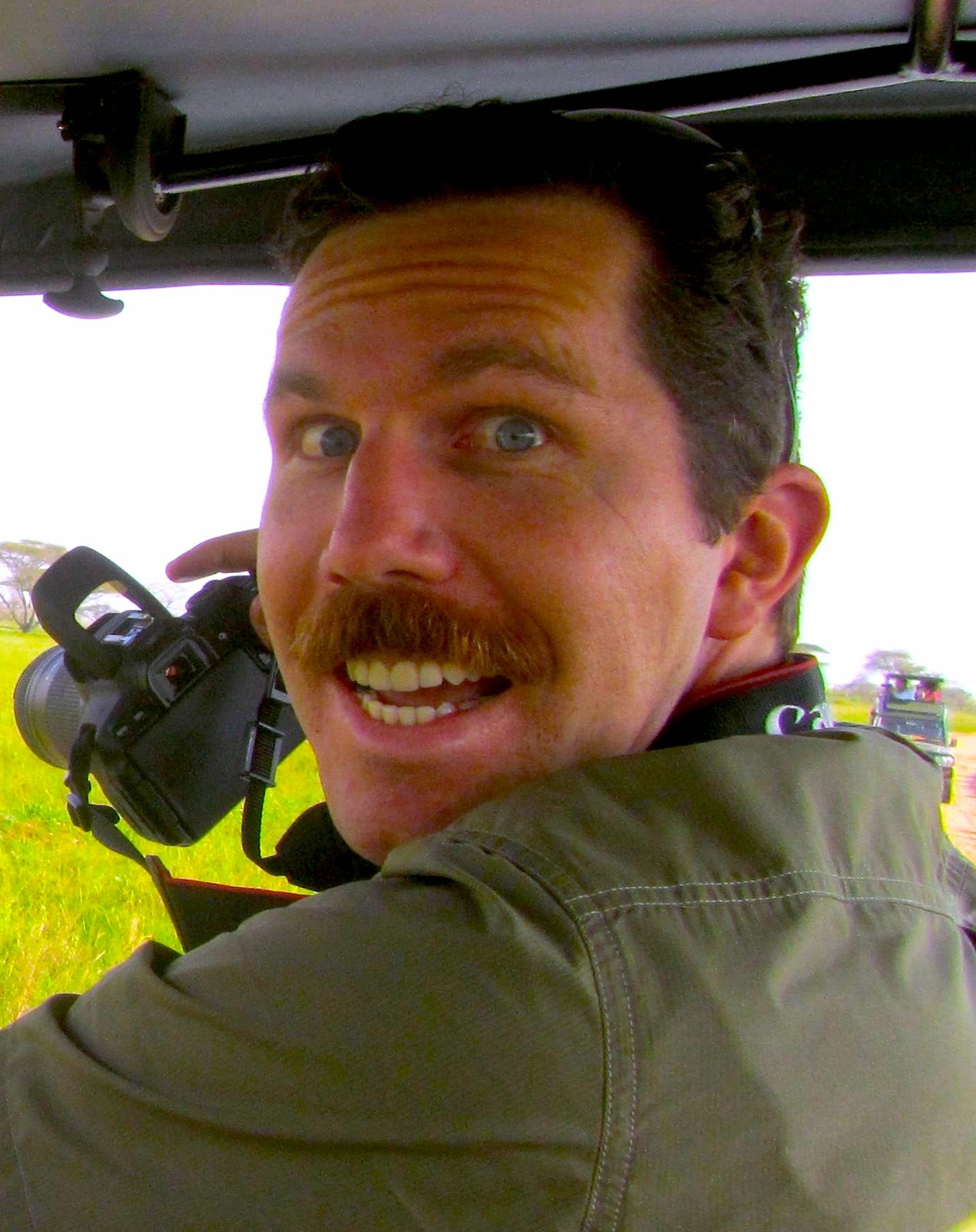 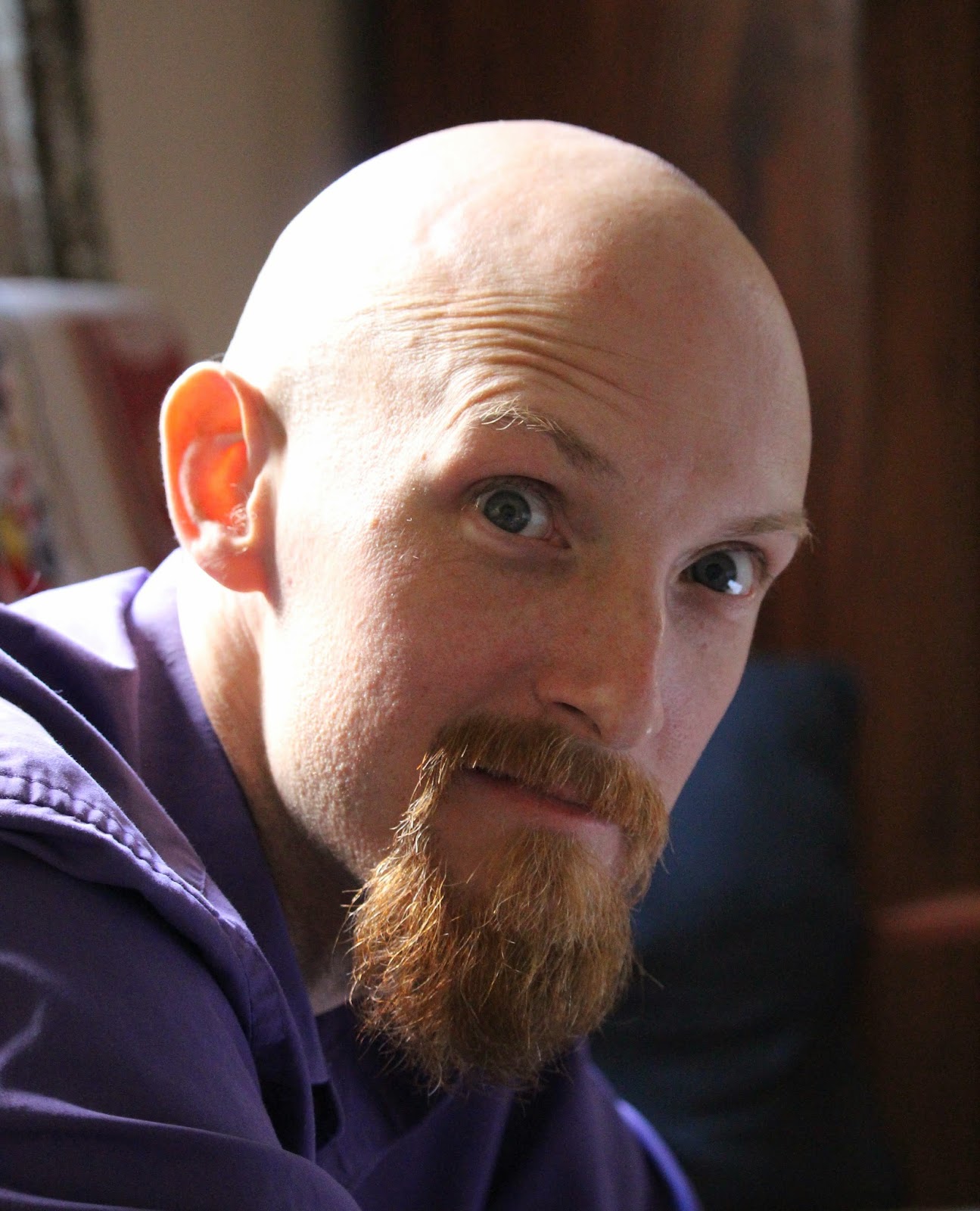 L-R: An Idiot, Another Idiot 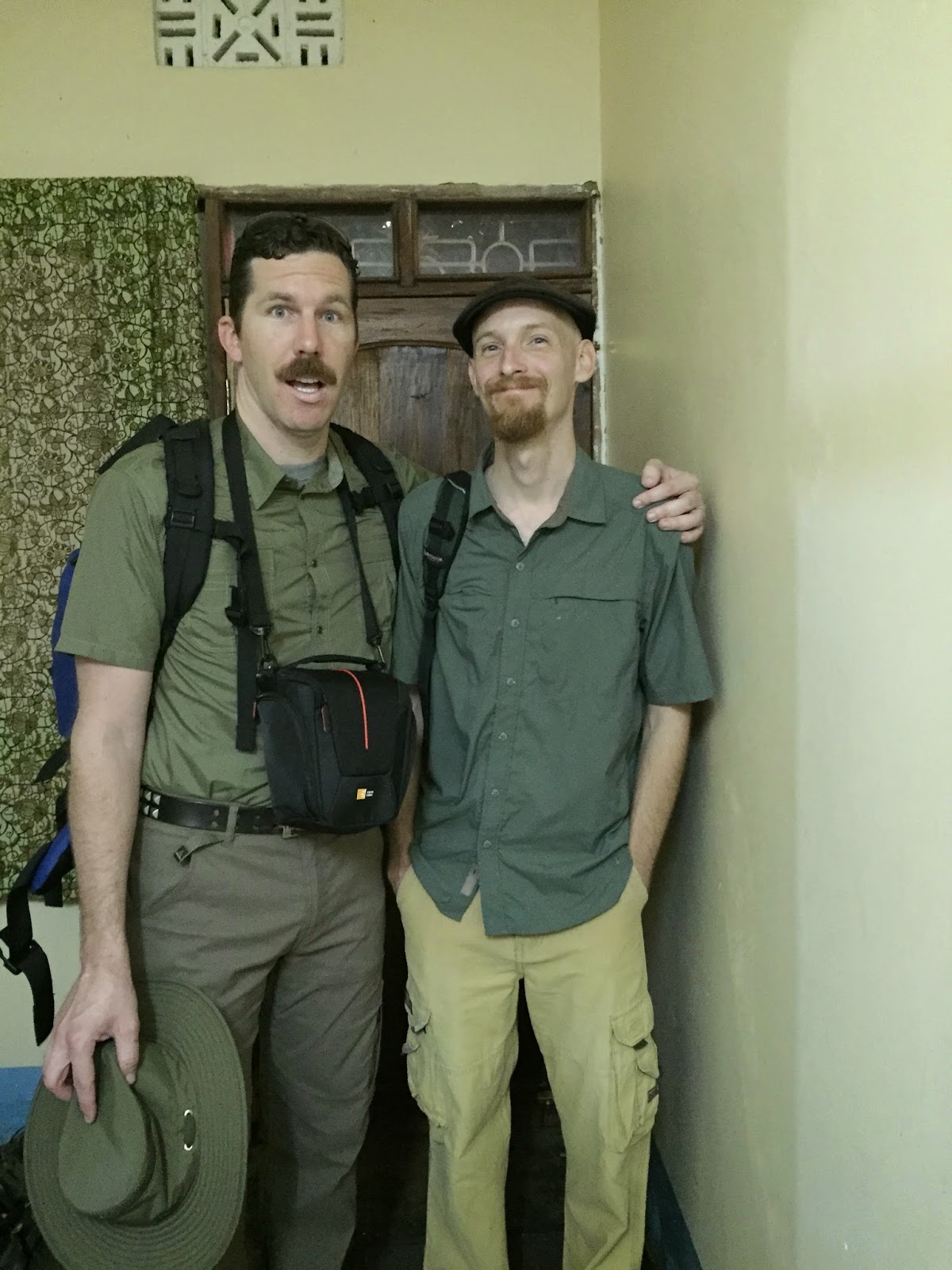 So this January, one of my oldest, dearest friends, Jeremy Mucha’ (AKA Cap’n Hardqore, AKA Homeskillet) came to visit Katie and I in Mwanza. As per usual, taking a safari through several of Tanzania’s national parks was on the agenda. So Jeremy and I scheduled a 4-day safari through the Serengeti, the Ngorongoro Crater, and Lake Manyara National Park.

Day One was great but uneventful (except for the lion thing and that hyena encounter, but that's a story for another day).

On the afternoon of the second day, as we are heading back from Lake Manyara, we stopped at the entrance gate into the Ngorongoro Conservation Area. Each vehicle and all passengers must register at the gate, so our driver, Mashaka, was to handle the registration. As we pulled up, we saw several other tourists standing in a crowd taking photos. As we park, we see a large crowd of baboons lounging at the edge of the parking lot, just about 15-20 feet from where we have now parked.

Mashaka sighs and says, “Those things are a pain, and they will grab anything they can get their hands on. So if you get out of the vehicle, make sure you roll up the windows and shut the doors.”

Now, I’ve lived in Tanzania for three years now, and baboons’ propensity for climbing onto and into cars looking for food is notorious. So I said, “Oh, yeah, no problem. Absolutely.” And nonchalantly start to checking my email on my phone. 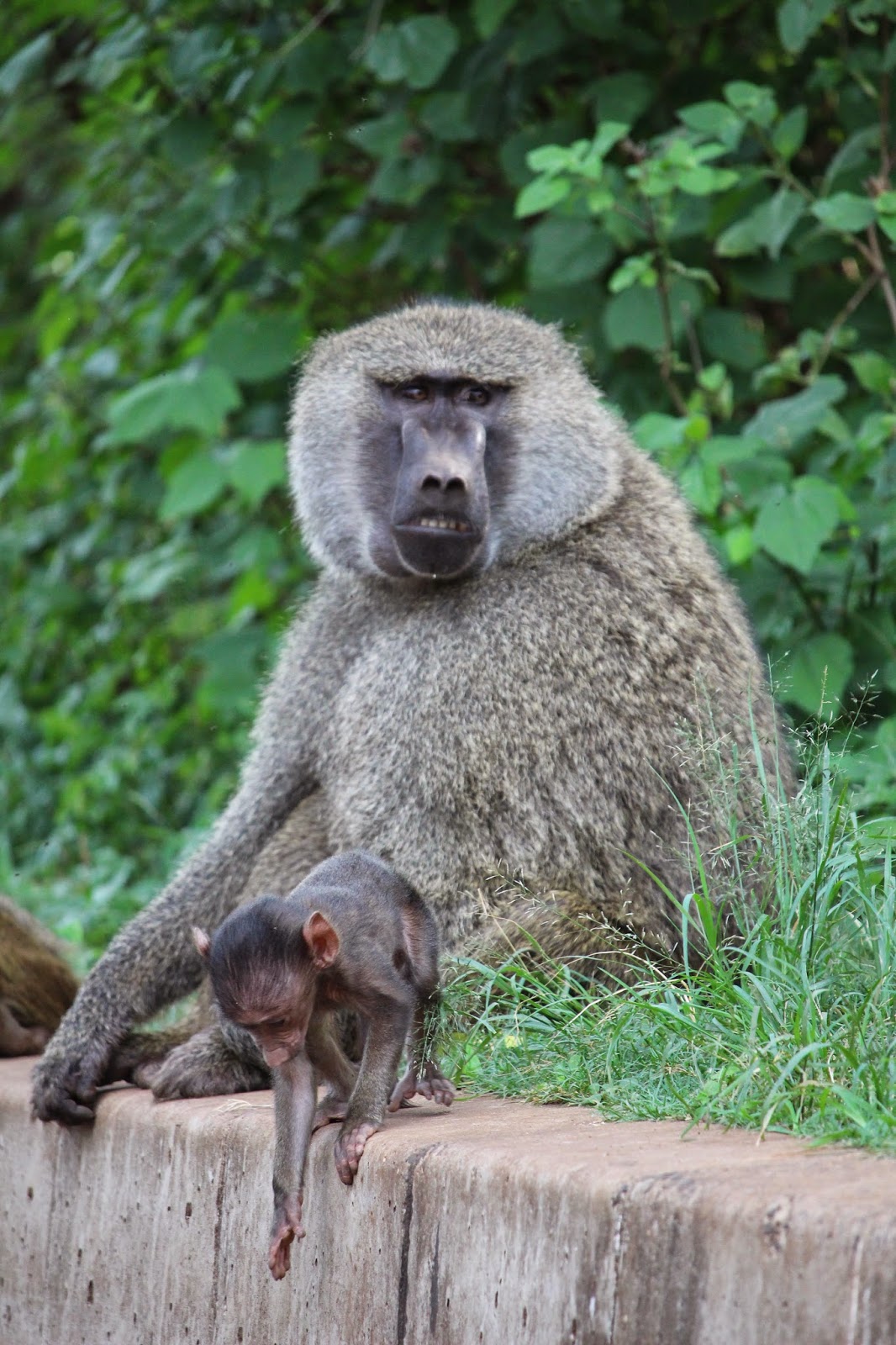 So we’re sitting there, and Jeremy is looking out the window at the baboons. I wasn’t paying much attention because I’ve seen TONS of baboons, but these guys were hamming it up and putting on a show. They weren’t amateurs at this gig. The biggest male was holding his feet and rolling around on his back grinning for photos. Jeremy was watching and watching…and the siren song of the baboon won out.

Jeremy says, “I’m gonna get out and snap a few pictures of these baboons.”

“No problem,” I say, as I continue to read my emails.

What I failed to notice was…assuming that since I was still in the vehicle there would be no issues, Jeremy has left his door open.

So Jeremy joins the crowd of other tourists ogling and taking pictures of the baboons. I glance out my window and see these baboons have moved really close to the car. They are very docile and obviously used to people, because people were standing just feet away from them.

So Jeremy comes to my window with his camera and says, “Hey, can you get a picture of me with these guys? I wanna get pretty close for the picture.”

He tries to hand me the camera through my window, but it’s a little awkward to grab the camera, so I say, “Hold on, let me just open the door and get the camera.”

And that’s when Jeremy looks over my shoulder into the car and says “OH SHIT!”

Because THIS is what he sees: 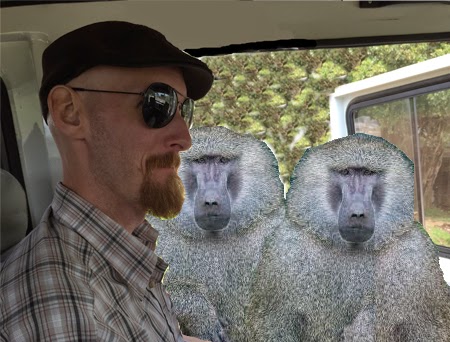 Two baboons. In the car. Sitting in Jeremy’s empty seat.  Next to me.

Evidently, as I was unaware that the door was open and was totally distracted by the good internet signal, I missed the crucial fact that two large, wild animals climbed into the car with me. So I do what any normal person would do: I scream, jump out of the car, and slam the door.

So, to recap: Jeremy and I are outside of the car, and two wild baboons are inside the car. It should be noted that with me now outside of the car, the baboons promptly set forth to ransacking the vehicle looking for lunchboxes and other food. Clearly, these guys had done this before.

So Jeremy and I are laughing and panicking and I’m saying some variation of “ohshitohshitohshitohshit!” The other tourists are all laughing and taking our pictures now. And other tour guides are driving by, shaking their heads, and giving us the stink-eye. "These wazungu are idiots," they think. "They didn't listen to the driver." BUT WE DID!

Panic aside, we quickly assess the situation and realize we’ve got to get the baboons out of the car. So we run to the other side of the car and I just open the front door (where one of the baboons was sitting) and just point my finger at him, motion outside the car, and sternly yell “OUT!” And shockingly, he looks at me…and gets out. Jeremy, emboldened by this, opens the back door and jumps in next to the other baboon and yells “GET OUT!”, at which point it promptly does.

So, in less than one minute, the baboons are out. But they took our plastic lunch boxes (belonging to the safari company) and ran off to see what goodies they got. They walk about 15 feet away, pop the lids of the containers and immediately start shredding all the scraps and leftovers, as seen below: 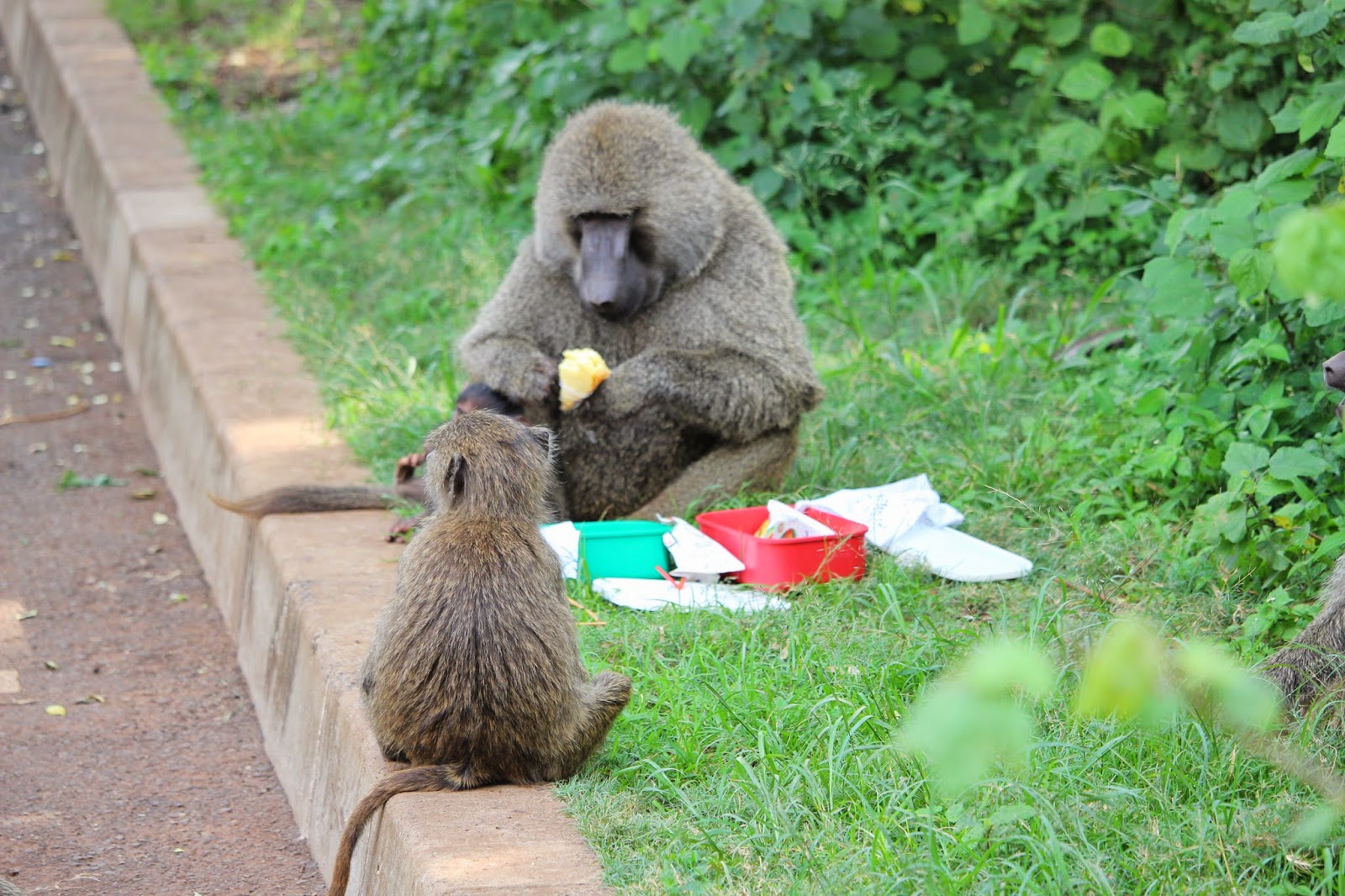 Just look at these bastards...

So now we start commiserating on our next steps. Do we charge them? Should we wait for our driver? Will they gang up and charge us? Are they aggressive? There are fifteen of them, but only two of us.

Well, make that three of us, because we realize out driver, Mashaka, has come back out and is standing behind us alternating between looking at the baboons and looking at us. Looking very annoyed, by the way.

He says, “I told you to shut the windows if you get out of the car!” To which I reply, “I NEVER GOT OUT OF THE CAR!” These damn baboons are making me look like an idiot! I CAN DO THAT MYSELF, THANK YOU VERY MUCH.

At this point, Mashaka wings a rock at the biggest baboon and scares it off a bit. So we all just charge the crowd of baboons, yelling, clapping our hands, and whipping the ground with a switch

Now, this is the part where I could most likely have died…but actually, all the baboons ran away. So we swoop in and grab the lunch boxes and clean all the trash scraps up from the mess they made, and…that’s it.

We all laughed, got in the car, and drove away.

But somewhere out there, in the dark of the wilds of Tanzania, sits a solitary baboon, remembering what he had gained and what he has now lost, and plotting his revenge… 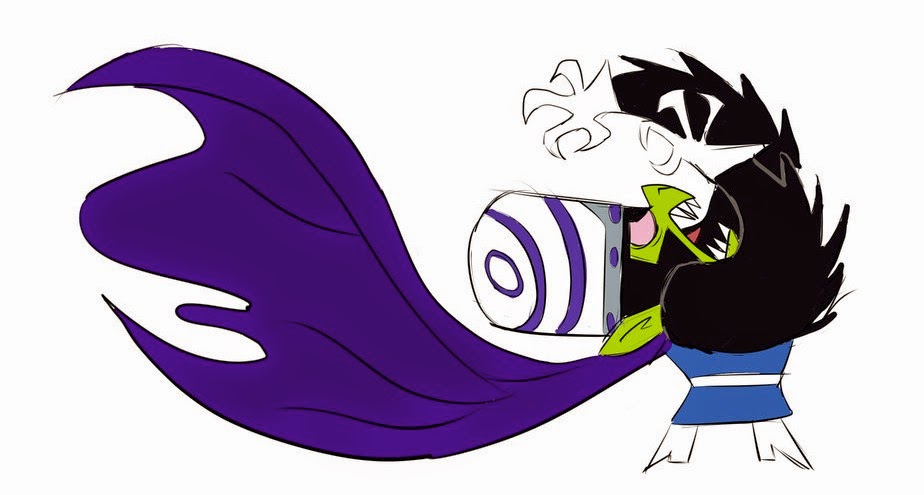 HO-LYYYYYYY AMAZING STORY. Laughed and snorted. And snorted and laughed.

Also, I would expect nothing less from the 2 of you in safari. AMAZING.

I can tell it's an artist's rendition, because the guy with the beard is too handsome to be real.

I see you guys are still "skipping to class" between A and B buildings. (metaphor for well grounded goof balls enjoying the moment). Love the freeze frame partners in crime pictures.

So, I'm doing my research on Tanzania for Kids Co-Op in April. How did I miss this post in Feb? Snort, Snort...I so would've been laughing my baboon butt off at yall!!! But, you know me...I would've been snapping pictures of you at the same time it was happening, regardless of the possible danger. That's Great...Great Stuff.

Garima Pandey said...
This comment has been removed by the author.
2:40 AM

Garima Pandey said...
This comment has been removed by the author.
3:30 AM

Garima Pandey said...
This comment has been removed by the author.
3:30 AM

Garima Pandey said...
This comment has been removed by the author.
3:32 AM

Here for those who looking for a spouse with whom supporting the doorways on your location for appreciating romantic day, you can accomplish that you haven't. To introduce myself, I'd love to inform that I'm one of the most magnificent and fascinating love spouses providing proficient and emotional escorts services in Delhi.
Delhi Escorts
Jaipur Call Girls
Goa Escort
Jaipur Escorts
Goa Escorts
Gurgaon Escorts
Nainital Escorts

Our Nainital Escort service is regarded as a standout among the very presumed and nicely fabricated escort offices because we've been providing services to our clients with ultimate precision, polished ability and intense erotica. At the stage when these items are combined together then you can get an expansion to gripe and find any kind of escape clause because capability.
Nainital escort service
Jodhpur escorts
Rishikesh escorts
Mussorie escorts
Ajmer escorts
Dehradun escorts
Haldwani escort service
Lucknow escorts
Agra escorts

If You're such Kind of Gentlemen who understands the flavour of actual and organic beauty and if you're a discreet guy and searching for a stunning all-natural beauty then do not squander your valuable time by searching other Delhi Escorts since its authentic for the Escort Service can be obtained any time around the clock.
Delhi escorts
Pune escorts
Mumbai escorts
Jaipur escorts
Goa escorts service
Nainital escorts
Dehradun escorts
Haldwani escorts
Jodhpur escorts
Gurgaon escorts

In the world today once you have some time limitations, it will become tough to ensue the entire process of meeting somebody find Udaipur Call Girls, befriending them and then linking to them. After all this you're left with strings and duties tied to you personally.
Udaipur escorts

We have the absolute most exotic models and film big names to go with you in private lodgings and condos while guaranteeing all out fulfilment. Our free escorts are available to confront any urban network at truly moderate expense.
Ahmedabad escorts
Udaipur escorts
Ajmer escorts
Nainital escort service