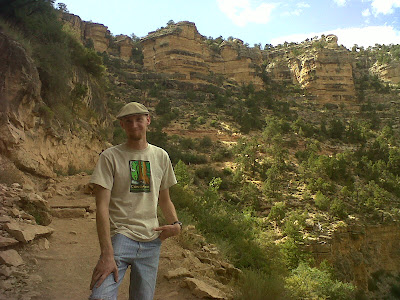 After our visit to Mississippi, we ditched our car at my Uncle’s house and flew out to Phoenix, AZ to see Garry and Holly, Katie’s dad and step-mom, plus her sister Rachel who had joined us for a few days. I had been THROUGH Arizona before on my road trip out to LA back in 1999, but we didn’t stop in Arizona, so this was all new to me. Garry and Holly really went all out to show us a good time, so we took in the Grand Canyon and Sedona, both of which were stunning. I’m glad to have sen the Grand Canyon, because so many of my international students had seen it and were always very surprised when they found out I had not. Since we are on the verge of leaving this country/continent/ hemisphere for several years, I was very pleased to be able to see this beautiful sight right here in my own “backyard.” Seemed patriotic, almost.

But whatever, we went to a MUSIC MUSEUM!

On our first full day there, we went to the Musical Instrument Museum (MIM) in Phoenix. I’ll be honest: I LOVE music, I can play trumpet, I can read music, but I’m not particularly “musical.” Music theory, and chords, and all the technical stuff about music escapes me, so I was not quite sure that a whole museum about instruments would be a whole day’s worth of activity. I was nervous it would lose my attention pretty quickly. I WAS WRONG. We spent SEVEN HOURS at this museum. It had a separate display for every country on the planet. Which means it was really a world music museum and THAT is exactly the kind of thing that can hold my attention for at least, oh, uh, seven hours. A few observations: 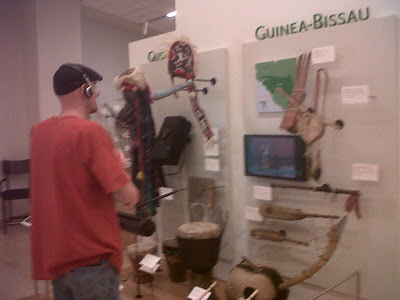 1. I have a lot of world music in my collection (some of which I cannot understand) and within the first 10 minutes, I had already learned which instrument makes a very unique sound that appears all throughout my music collection from West Africa. It was great. This happened more than once.


2. The instruments themselves became rather repetitive and similar, which was actually very interesting. It is interesting to see which instruments spread throughout the world thru migration, cultural sharing, and conquest, and also how many of the basic shapes and styles of instruments are universal.

3. This was one of the most aesthetically pleasing museums I have ever seen. The displays had video monitors playing videos of instruments representative of the featured country. You wore a headset, so as you walked through the museum, you headset picked up the audio for the video playing in front o you, so as you strolled along, the music changed along with the countries. Great layout, great displays. Even the restaurant was great, offering one of the best veggie burgers I’ve ever had. I highly recommend this place. 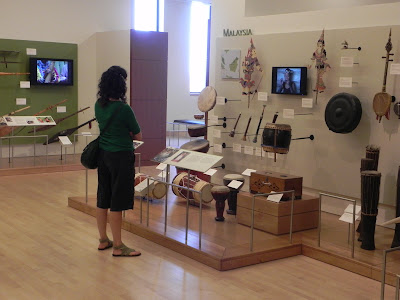 We spent the following day at the Grand Canyon. I won't write much about it because it’s really impossible to describe. Let’s just say it’s pretty GRAND. However, I will talk about how my never-really-gives-me-a-problem mild-at-best fear of heights came blasting to the forefront as I approached the edge. Really wasn’t expecting that. Factor in the fact that I had been experiencing some mild vertigo that was keeping slightly off-balanced, and I’ll say the trip- while beautiful and amazing and totally worth it- wasn’t qute as relaxing as it could have been. Especially hiking down some of the switchback trails leading down into the canyon. The picture below shows that I pretty much hugged the inside edge as much as I could and tried to keep away from other people as I hiked. 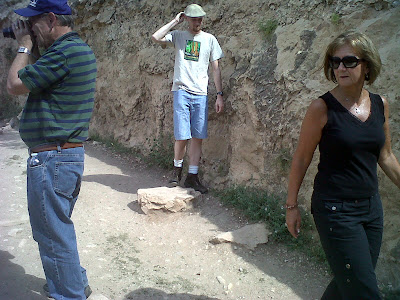 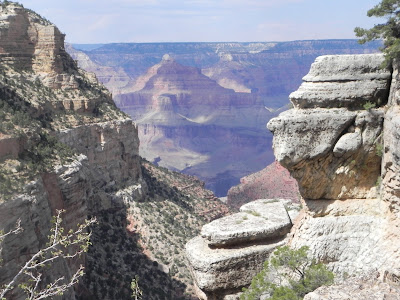 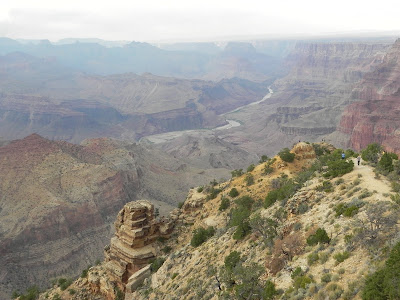 Two days later, we went to Sedona, and while it is not as overwhelming as the Grand Canyon, it is still equally as beautiful, in my opinion. First stop was at the Chapel of the Holy Cross, a functional Catholic chapel that overlooks the area. 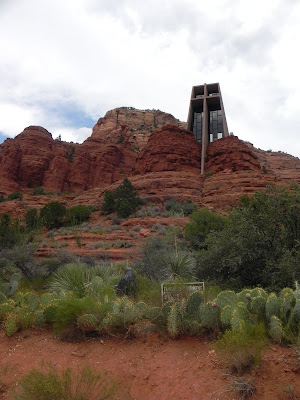 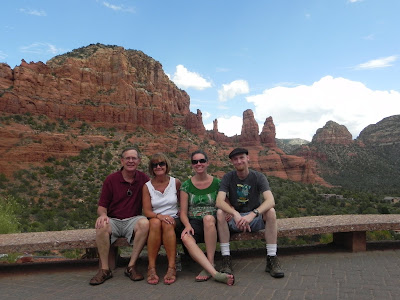 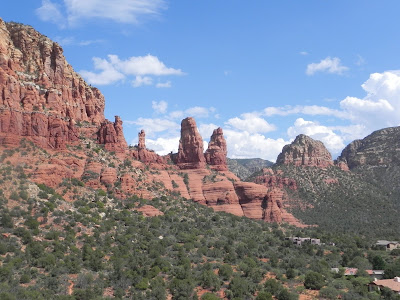 Garry and Holly treated us to a Pink Jeep Tour and took us up to Schnebly Hill Vista. As we stood on the rim, a rainstorm was blowing in, and we could see the rains begin to fall on Sedona in the distance. Truly a beautiful sight. 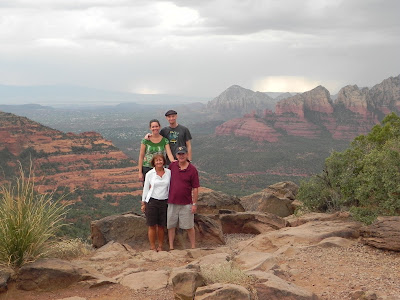 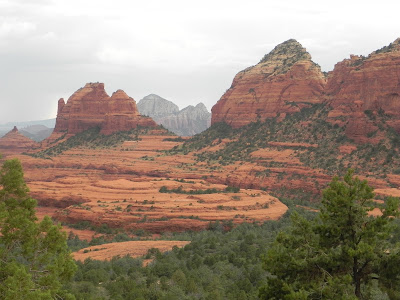 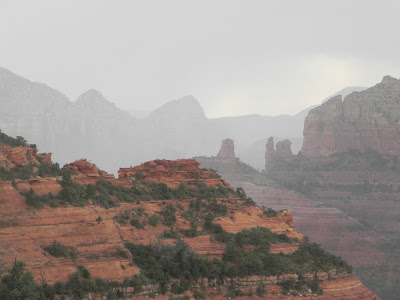 To see the full set of pictures from the Arizona potion of the trip, CLICK HERE.